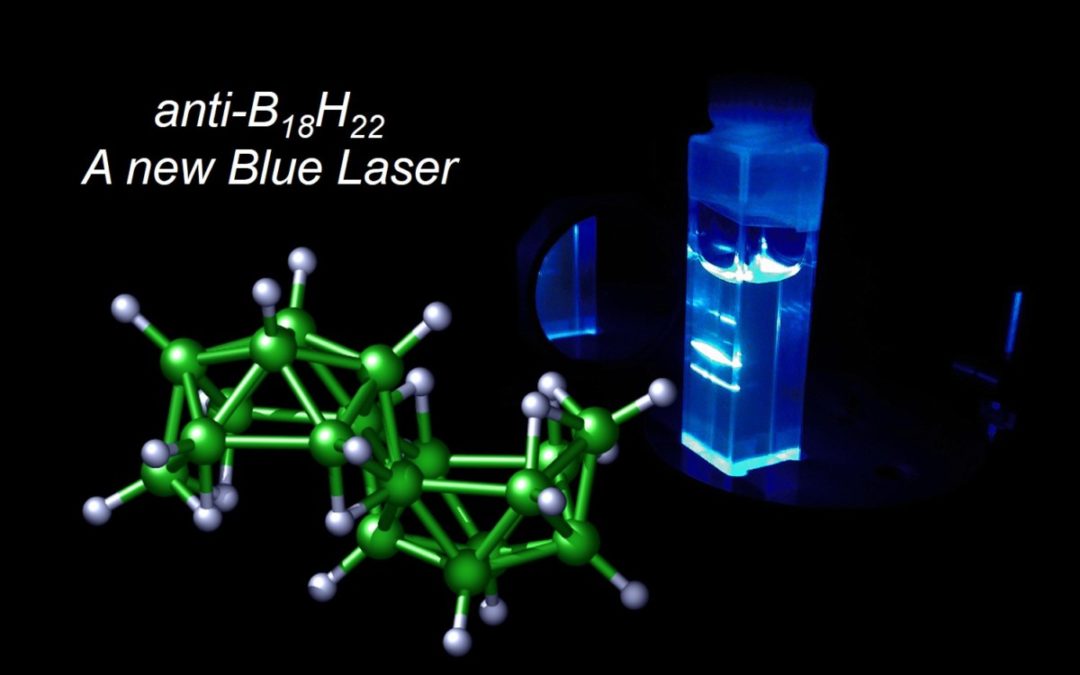 A team of scientists led by Dr. Michael G. S. Londesborough from the Institute of Inorganic Chemistry of the Academy of Sciences of the Czech Republic and Dr. Luis Cerdán from the Spanish National Research Council (CSIC) has discovered a new type of laser based on an inorganic material – a complex of boron and hydrogen – (no carbon atoms) that emits blue laser light from solution. The work, published in Nature Communications, demonstrates that the new material irradiates efficient and degradation-resistant laser emission in the blue, a spectral region of interest in applications such as spectroscopy or materials processing, among others.

The first laser was developed in 1960, and, 55 years later, there is still a search for new materials that emit efficient, tuneable and stable blue laser light that are, in addition, cost-effective, and easily produced and processed. “Currently there exists a diverse range of commercial materials that are close to fulfilling those requirements, but they present some practical inconveniences. In our study we present a solution that seeks to contribute to overcome these limitations,” clarifies Inmaculada García-Moreno, CSIC researcher at the Institute of Physical Chemistry Rocasolano.

New uses for a known compound

Despite not being a novel material, this is the first time that the boron hydrides, or boranes, have been used to obtain laser light. Specifically, the researchers have concentrated in their work on solutions of anti-B18H22 – “The boranes have cluster-like molecular architectures with highly delocalised electronic structures,” says Dr. Michael Londesborough, borane specialist from the IIC, “The structure of anti-B18H22 resembles that of a split soccer ball with molecular orbitals connecting both halves.”  Of all the laser materials known so far – organic dyes, quantum dots, halide perovskites –  , the boranes are, in terms of structure and properties, most similar to organic dyes, which emit laser light in an efficient and tuneable manner (very high energy with controllable colour), but that are easily degraded, necessitating the frequent renewal of the laser medium.

The new borane laser material shows a resistance against degradation that is superior to many of the commercially available state-of-the-art blue laser dyes. This high resistance against degradation means that the number of times the liquid medium has to be replaced is reduced, helping to solve issues with costs, occupational hazards and environmental impact due to the handling of solvents that are often toxic and flammable.

The team of researchers is currently working on the synthesis of new boranes that emit light at other wavelengths (colours), as this would open the doors to, for example, their possible application in dermatology (Tattoo, scar or acne removal, as well as treatments of vascular lesions, to name but a few potential applications). In addition, the excellent solubility of anti-B18H22 in organic environments enables its incorporation into polystyrene polymer matrices without the loss of its fluorescence properties.  The resultant new range of anti-B18H22/polymer nanocomposite materials with interesting optical properties have potential for use as coherent light sources in optoelectronic, spectroscopic and sensing devices, and as chromophores in luminescent solar concentrators.  “There is still plenty of work to be carried out before these compounds can reach the commercial shelves, but the scientific relevance of this discovery represents a milestone in the history of lasers, since there are not many occasions in which a new family of laser materials is unveiled,” concludes Dr. Luis Cerdán, a CSIC researcher at the Institute of Physical Chemistry Rocasolano.  Dr. Michael Londesborough, from the IIC, agrees, “We are highly excited by this discovery.  The boranes, with their unique molecular structures and high photostabilities, present a new and previously untapped resource for laser technology.”